A science graduate has made the most of her expertise to celebrate the publication of her debut novel.

Anomaly, the first book by Caitlin Lynagh, is described as paranormal fantasy. It’s set in the after-life and primarily aimed at young adults.

Caitlin, 24, who lives in Lytham with mum Hazel, graduated from Keele University in 2013 with a BSc degree in biology and geology and has long had a passion for writing.

In Anomoly, she draws on her science knowledge to create an emotional story which queries whether the possibility of an afterlife lies in science rather than faith.

A former pupil of Heyhouses Primary, St Annes and the former Arnold School, Blackpool says she is ‘more nervous than excited’ about her book hitting the shops - and explianed how the opportunity, via Liverpool-based Outlet Publishing. came about.

“I have always enjoyed writing stories and showed this to a friend one day,” said Caitlin.

“She suggested that I send it to Outlet and I was delighted when they said they wanted to publish it.

“It is a standalone story but could also work as the start of a series and I am already well on with my next book.”

Caitlin, who works from home as a research assistant, runs a book review blog, The Book Igloo, and already has thousands of followers on Twitter and Tumblr. She has recently started her own Facebook group, which she hopes will become a discussion platform for the science in her book.

In Anomaly, character Alice Lynam has been dead for two years. Deceased souls have important information concerning humanity’s future, certain individuals are set to change the world and Alice’s childhood sweetheart, Kyle, happens to be one of them. However, Kyle’s grief has set him on a path that can only bring frustration and unhappiness. On Kyle’s 21st birthday, he receives an unusual notebook which once belonged to Alice. Two pages are missing, and after a freak accident, Kyle is forced to revisit his past and concludes that his life is not as coincidental as it seems. Alice needs to find a way to get through to Kyle and place him on the right path. 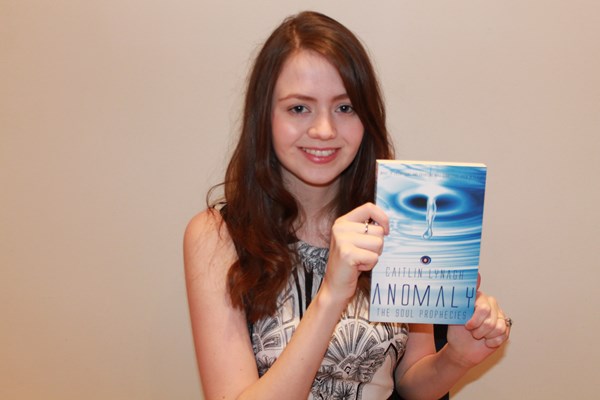